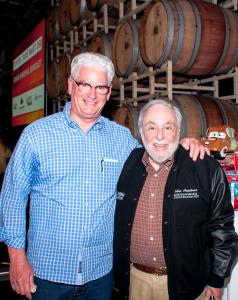 The proceeds from the majority of events will benefit Sonoma County youth organizations through the Sonoma Chapter of Speedway Children’s Charities, the charitable arm of the raceway, which has distributed more than $5.1 million to local youth-serving non-profit groups since 2001.

Overall, the banquet generated more than $156,000, while the Ride-of-a-Lifetime Online Charity Auction raised over $10,000. A live auction was also held the night of the banquet for a special NASCAR Race-Day Experience, which included a meet and greet with the NASCAR on FOX broadcast team and a behind-the-scenes tour of the iconic Hollywood Hotel. In addition, a special Pixar Studios package included a CARS-themed gift basket and a private tour of the Emeryville headquarters. Both packages combined to bring in nearly $15,000.

More than $25,000 was also raised through various donations during the weekend, including a $5,000 donation on behalf of the Transporter Drivers of Motorsports Association (TDMA), which participated in the 6th annual NASCAR Hauler Parade in Sacramento on June 23. Great Clips raised over $6,000 in donations throughout the weekend at its mobile hair salon in the main paddock. 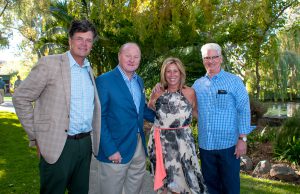 NASCAR on Fox analysts Michael Waltrip and Larry McReynolds, Linda McReynolds and Steve Page (left to right).
The NASCAR weekend provides an excellent opportunity to leverage the generosity of our fans, sponsors and other partners to help support good work in the community, said Steve Page, Sonoma Raceway president and general manager. We are grateful to all who participated and to the wonderful non-profit groups who are elevating the lives of young people in the North Bay.

Levy Restaurants also donated nearly 2,500 pounds of food to Food Runners, a San Francisco-based non-profit that collects and distributes quality, perishable and prepared foods to those in need.