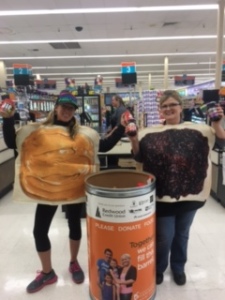 Thanks to Save Mart and Lucky stores for a successful Peanut Butter Roundup. Store 776 in Santa Rosa took the prize in enthusiasm!

The two-week campaign resulted in a jump of 15% over last year, collecting nearly 21,000 pounds of peanut butter, which translates to nearly 300,000 sandwiches for hungry kids over the summer throughout California and Northern Nevada. Summer is a critical time because the kids who rely on school meals won’t have access to those meals during their break. This helps fill the gap. Big thank you to Jif Peanut Butter and Smucker’s Jelly for boosting the campaign by offering our customers to buy one jar and get one free to donate.

The “roundup” feature, which allows shoppers to roundup their grocery bill to the nearest dollar, was new this year. That raised nearly $10,000 for local food banks, which enables them to buy whatever else they need. Our food bank partners report that one in four children goes to bed hungry each night. Our shoppers did great in helping ease the problem.